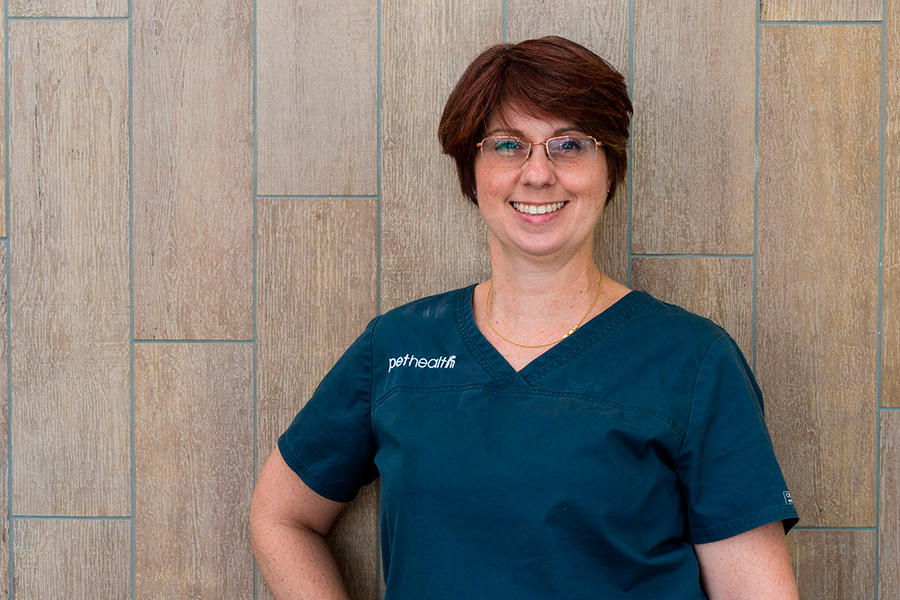 Tracey has been a licensed veterinary technician for 20 years. She joined the Pet Health team in December 2015 because she believed in the quality of medicine and the close connection the staff has with the pet parents. Tracey grew up in a small farming community in West Central Indiana. She married her husband, Randy, in July 1995, and they lived and traveled all over the world together while he served in the United States Air Force. She still enjoys traveling. Her other hobbies include camping, restoring a 1970 Corvette with her husband, and competing in dog agility with her two dogs, Frank (8-year-old pug) and Truman (1-year-old French bulldog).

She obtained a bachelor’s in animal production in May 1995 from Purdue University, and became a licensed veterinary technician in Nevada in 2005. Tracey first became interested in canine rehabilitation through her interests in agility and canine sports. She obtained her certified canine rehabilitation practitioner status in December 2018 from the University of Tennessee.Tracey believes rehabilitation medicine and preventive rehab techniques for our athletic pets and injured or senior dogs and cats can help them live longer, pain-free lives, reduce their risks of injury, and strengthen the bond they have with their pet parents.

When asked what she likes about rehab, she replied, “The best parts of rehab are the special bond of trust that forms with each pet and its owner as they progress through physical therapy, and that they can’t wait to come to the vet because they know they are going to get treats, have fun, and feel better!”