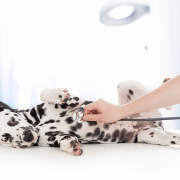 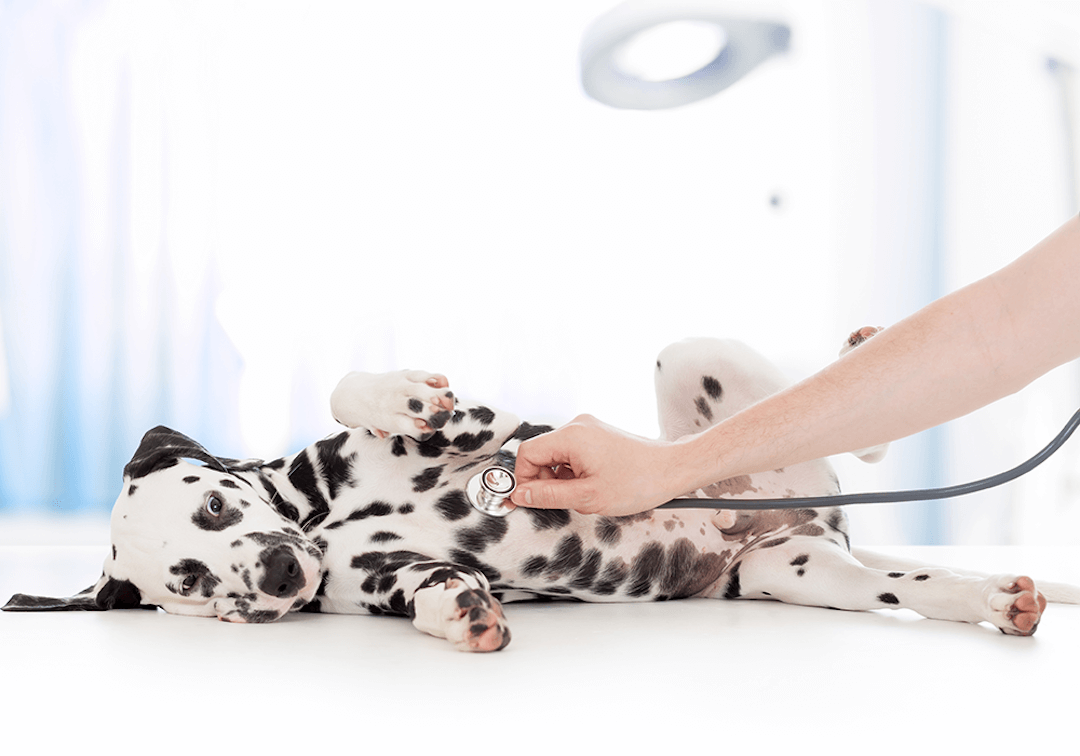 Cranial cruciate ligament disease occurs for several reasons. Certain dog breeds are genetically predisposed to developing the condition, and factors like weight and activity can exacerbate the problem. Early on in the course of the disease, many clinical signs are minor or not noticed at all. When the disease advances or eventually turns into a full tear, a dog will show signs of lameness or suddenly hold up their leg. When the cruciate tears, it’s like a human’s ACL tear in a dog, painful and debilitating. This lameness usually worsens with exercise and seems to improve with rest.

A cranial cruciate rupture in a dog won’t heal on its own, and as a result, most pets require a surgical repair. Several surgical techniques for the condition have been developed including:

The two most commonly recommend corrective surgeries are the TPLO and TTA procedures.

The Differences Between TPLO and TTA 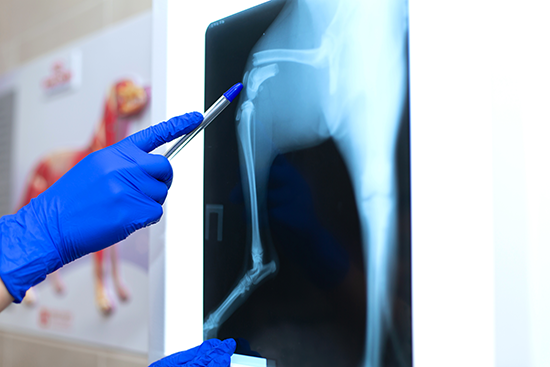 The TPLO procedure was developed by Dr. Barclay Slocum in the 1980s. Dr. Slocum noticed that some dogs had an abnormal slope of the knee (tibia), which put added pressure on the ligament and predisposed dogs to developing CrCLD. Instead of fixing the ligament, Dr. Slocum decided it would be better to correct the abnormal slope. His surgical technique resulted in better results than previous surgeries. He patented his technique and the instruments he developed for the surgery, and veterinary surgeons all over the world use his technique today.

The goal of a TPLO surgery is to reduce the angle of the tibia’s slope. Prior to surgery, a veterinary surgeon will measure this angle in order to determine the scope of the surgical slope reduction. During the procedure, the surgeon uses a specially curved saw to make a cut (osteotomy) on the top surface of the tibia. The surgeon then rotates the cut portion of bone to create a more desirable angle. The surgeon will place a stainless-steel bone plate, which holds the two pieces of tibia together, until the osteotomy site heals after about eight to twelve weeks of recovery.

This procedure was developed in Zurich, Switzerland in the early 2000s. TTA uses biomechanical principles to adjust the angle of the patellar tendon. This effectively neutralizes the tibial thrust, which occurs when a dog with cranial cruciate ligament disease bears weight on an affected joint.

Prior to surgery, pre-operative measurements will be taken, using stifle radiographs (x-rays of the knee). Pre-operative measurements are used to determine the size of surgical appliances needed for the patient’s procedure. During surgery, the surgeon performs an osteotomy, a cut in the bone. Using an advancement cage and internal fixation device, the surgeon then moves the tibial crest forward from its original position.

How to Decide between TTA and TPLO 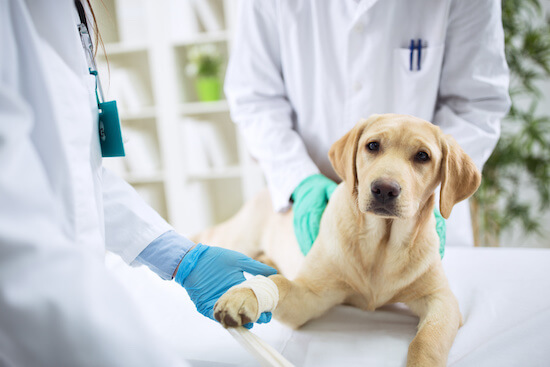 Unfortunately, dogs can’t tell us how they feel following a surgery. As a result, deciding which procedure is better for a dog must be based on observational outcomes of both surgical procedures.

TTA can have a potential advantage over TPLO in the immediate post-operative period, as dogs subjectively sometimes appear to be more comfortable and bear more weight because the TTA involves a less invasive osteotomy or cutting of the bone. Full-weight bearing, however, has been shown to be better with a TPLO at six months of age.

Again subjectively, some surgeons believe that TPLO is better for more active or athletic dogs. Recently published literature reviews, however, were unable to clearly identify a superior surgical procedure, and studies have shown that TPLO and TTA achieve the same level of function by 12 months after the surgery.

Surgery complications aren’t common for either procedure, but according to Dr. Mark Beerenstrauch from Pet Health Hospital, DVM, “Complications can occur with any procedure, and vigilant post-operative exercise restriction, as well as following instructions for recommended rehabilitation and exercises will minimize these risks.”

Some potential complications of TPLO and TTA surgery include the following:

Infection of the implant is one of the more common complications associated with these procedures, although implant infection risk is low at 7.4%. If an infection does occur, a dog’s implant would need to be removed. Removal of implants from a TTA surgery can be much more difficult and have a higher risk of bone fracture, compared to the relatively easy removal of a TPLO plate. This is one significant advantage of TPLO over TTA.

Overall, veterinary literature still remains inconclusive regarding the best therapeutic option to treat a cruciate tear in a dog. A dog’s outcome, much like complications, is largely determined by the experience of the surgeon, the quality of post-operative care, and adherence to recommended rehabilitation (dog physical therapy) protocols.

“I tell clients to do the procedure that your surgeon does,” said Dr. Bilicki, DVM, DACVS-SA, Diplomate American College of Veterinary Surgeons (ACVS). “They offer that surgical procedure because they’re good at it, and they like the results they achieve.”

Following either surgery, working with a certified canine rehabilitation specialist will ensure your dog is on the right track to regaining mobility. “While studies have not been able to clearly determine which procedure is superior, it has been demonstrated that both procedures have improved outcomes with post-surgical rehabilitation,” said Dr. Jessica Pizzillo, DVM, CCRP.  With dog physical therapy, dogs can achieve the best possible outcomes of TPLO or TTA procedures. 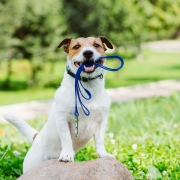 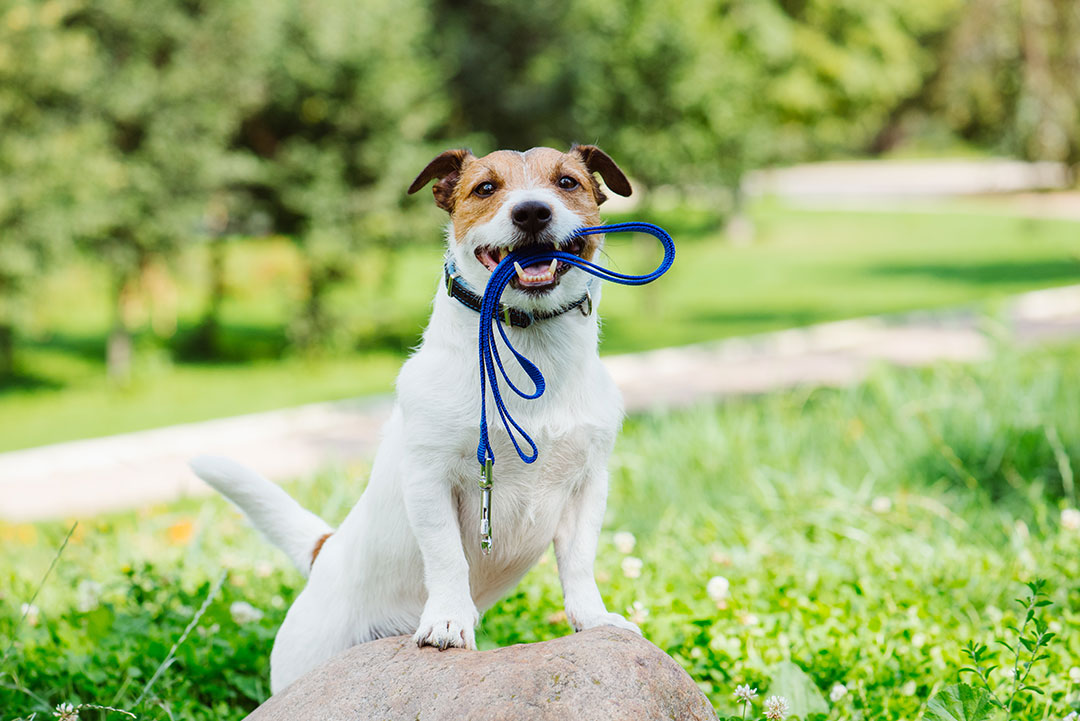 TPLO surgery (tibial plateau leveling osteotomy) is the most commonly recommended treatment for the rupture of a dog’s cranial cruciate ligament. This injury is like an ACL tear for dogs, and TPLO surgery is designed to stabilize the stifle (knee) joint following the ligament’s rupture.

How Does a Cruciate Tear in a Dog Happen? 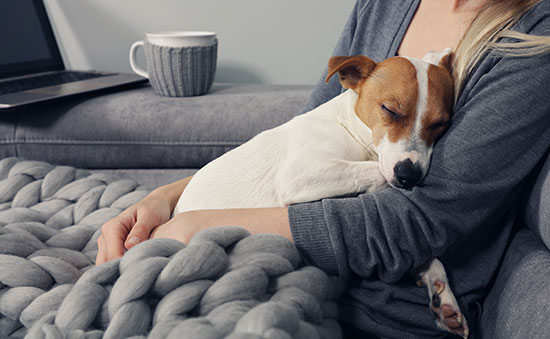 Dogs develop cranial cruciate ligament disease (the musculoskeletal problem that leads to a cruciate tear in a dog) for a myriad of reasons. Most commonly, the issue arises due to genetics. Certain predisposed breeds have a tibial plateau slope that’s inclined too far backward, which places constant stress on the ligament. 50% of dogs that develop CCLD due to a genetic component will eventually suffer a tear in both stifle joints.

“It’s by far the most common orthopedic condition we see in our practice,” Dr. Mark Beerenstrauch, DVM said of cranial cruciate ligament disease. “In breeds, which are genetically predisposed, I have seen it develop as early as six months of age.”

Additional factors, such as weight, metabolic diseases (hypothyroidism and Cushing’s disease), and a dog’s activity level can also play a role in the development of CCLD.

All about the TPLO Procedure 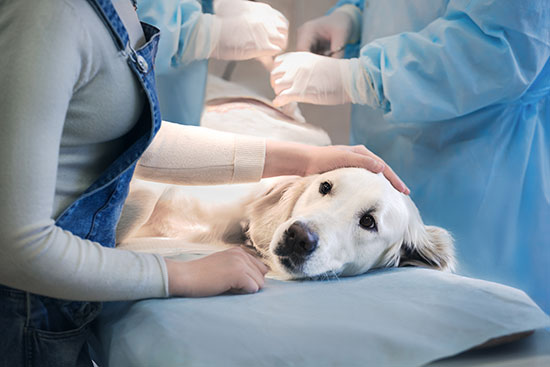 In the 1980s, Dr. Barclay Slocum noticed that some dogs had an abnormal slope of their knee (tibia) which predisposed them to develop CCLD. Rather than attempting to fix a dog’s ligament, as had been attempted with other surgical procedures, Dr. Slocum thought it would be better to correct the tibia’s slope, instead. His method produced much better results than other available surgeries. He patented the TPLO technique and instruments which he developed for the surgery.

How Does TPLO Surgery Work?

The goal of a TPLO surgery is to reduce the angle of a dog’s tibial slope, which puts less pressure on the dog’s cruciate ligament.

“TPLO essentially re-engineers the canine stifle in a way that makes the cranial cruciate ligament less important,” said our veterinary surgeon, Dr. Bilicki, DVM, DACVS-SA, Diplomate ACVS. “People have a five-degree slope of the tibia, and if they’re not athletes, they can learn to compensate for the instability. Our pet patients have a tremendous ability to compensate. If we can make them more like people — taking them from an average of 24 to 34 degrees to about five degrees — they thrive incredibly well.”

What Happens During a TPLO Procedure?

Prior to a dog’s surgery, we’ll measure the top of the tibia’s angle to determine a goal for the surgical correction. Surgery begins with an exploration of the stifle joint’s interior, which is intended to assess the cartilage (meniscus), looking for any damage. If damage is found, it will be removed. According to Dr. Bilicki, “Removing damaged cartilage is essentially like removing a rock from a shoe, which we believe can be as important as eliminating tibial thrust.”

The veterinary orthopedic surgeon will then use a specially curved saw to make a cut on the top surface of the tibia. This cut portion is then rotated to create a more desirable angle. The surgeon then places a stainless-steel bone plate, which holds the two pieces together until the osteotomy site heals (usually within eight to twelve weeks).

TPLO Aftercare: How to Care for a Dog Following Surgery 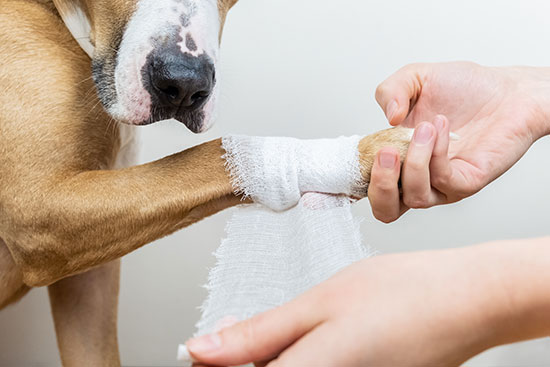 Providing a dog with the proper post-surgical care is essential to proper healing and the restoration of the stifle joint’s proper function. Immediately following surgery, it will be essential to restrict a dog’s activities until fully healed. This period of exercise restriction will last for eight weeks or longer, depending on the pet.

Canine rehabilitation (dog physical therapy) is also an essential component to a dog’s recovery and rehabilitation following TPLO surgery. “Although TPLOs are very effective at stabilizing knees and decreasing pain, they change the conformation of the leg. In addition, many of these patients have significantly reduced muscle mass and compensatory changes in other parts of the body,” said Dr. Jessica Pizzillo, DVM, CCRP. “Rehabilitation after surgery helps to maintain and restore optimal range of motion, while allowing for a controlled process to rebuild strength and coordination.”

If you’re concerned about canine cranial cruciate ligament disease in your dog, we encourage you to talk with a Pet Health Veterinarian about your pet’s personalized wellness plan, genetic predisposition, and the preventative measures you can take to reduce your dog’s overall risk of rupture.