Roundworms are visible in your pet’s stool or vomit. They are long and thin, similar to thin spaghetti. This parasite can pass through the placenta (only in puppies), through the milk (puppies and kittens) or be ingested (puppies and kittens). Some animals become infected after ingesting another animal with roundworm eggs. It is thought that nearly all puppies are born with roundworms since they pass through the placenta. In kittens, most become infected after nursing.

Typically, the eggs are found on the soil or grass. As the dog or cat walks by, the eggs are picked up on the animal’s fur. During normal grooming, the animal then ingests the eggs. After reaching the stomach, the eggs hatch. The developing larvae continue to mature in the small intestines and become adults in about three to four weeks. At this point, the mature worms are able to reproduce and shed more eggs. These eggs pass out the intestines in the feces. Once in the soil, the eggs will become infective in about one week.

Whipworms are another type of gastrointestinal parasite that affects dogs. The most common whipworm is Trichuris vulpis and it is a significant cause of large bowel diarrhea. The whipworm eggs are quite resistant and can live in the environment for up to five years.

Typically, a dog becomes infected after ingesting eggs from the environment. The eggs then hatch once they reach the stomach. It takes about three months for the eggs to mature to adults and being shedding eggs. The adults then burrow into the small intestine and feed on blood and tissue. The eggs are intermittently passed in the feces and become infective in about one month. Since the eggs are not shed all the time, repeated fecal examinations may be necessary to diagnose whipworm infection.

After ingestion, the eggs hatch in the stomach and develop into adults into about two weeks. If the larvae penetrate the skin, it takes about four weeks for the larvae to mature. Once mature, the worms begin reproducing and shed eggs in the feces. It then takes two to eight days until the eggs are infective. The adult worms attach to the lining of the small intestine and feed on blood. In a severe infection, profound anemia can occur.

Giardia are pear-shaped, one-celled organisms that infect the small intestine of dogs and cats. Most cases of Giardia in young animals cause explosive, watery diarrhea, dehydration, weight loss and an unkempt appearance. Adult animals are capable of harboring the infection without showing clinical signs.

The eggs are susceptible to chemical disinfection. Once ingested, the infective cysts develop in the small intestine. Diarrhea can begin as early as five days after exposure and cysts can appear in the feces one to two weeks after exposure. Most domestic animals contract Giardia from drinking contaminated pond or stream water.

Tapeworms are very common in dogs and cats and, despite what you may think, rarely cause illness. Most people see the tapeworm egg packets as they pass out the rectum and crawl on the animal’s fur. These egg packets, referred to as proglottids, contain multiple eggs and appear about six to eight weeks after ingestion of an infective tapeworm egg. In order to become infective, the tapeworm egg is either ingested by a rodent, rabbit or flea. The egg then matures and becomes infective. Eggs or egg packets eaten after they pass out in the stool are not infective and do not result in more tapeworms.

Animals infected with tapeworms may scoot on the floor since the egg packets tend to crawl on the skin, causing itchiness.

Coccidia are intestinal protozoa that invade and infect the lining cells of the small intestine. There are many species of coccidia and almost all domestic animals can become infected. Of the numerous types that infect dogs and cats,Isospora is the most common. Coccidia spread when an animal eats infected fecal material or an infected host, such as a small rodent. Many researchers maintain that virtually all dogs and cats have been infected with the organism at one time or another during their life.

Most coccidial infections are harmless, cause minimal symptoms and are eliminated by normal body defense mechanisms. More serious coccidial infections cause severe watery or bloody diarrhea and are often seen in high-density confinement situations such as kennels, catteries and pet shops. 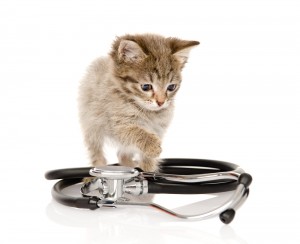