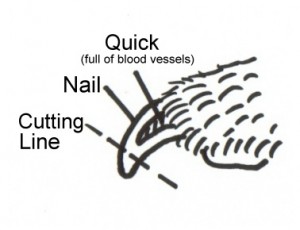 The procedure for trimming your dog’s nails is very simple, but will generally require two people in order to not harm the dog by potentially cutting the nail too short and causing bleeding.  One person will need to hold the dog to prevent them from running away, and the other person will use a pet nail clipper in one hand and hold the dog’s paw with the other hand.  You should hold the paw in your hand and grip the toes with your fingers, allowing you to have control if the dog flinches or pulls its paw away.  The process is very scary for many dogs, so you should expect them to squirm around and attempt to pull away.  The pressure caused by the clipper will also frighten the dog, which will cause them to jerk when you clip.  Because of this, it is best to set the clipper to exactly the position you want to clip on the nail, and then clip quickly.

The position that you are going to want to clip is roughly 45 degrees angle from the front of the pad, meaning that the clipping will angle closer to the pad on the bottom and further away on the top, however, this is going to be very slight so it is best to simply try to cut the nail flush with the area that will contact the ground when the dog is walking.   The most important thing to remember when clipping your dog’s nails is to not clip too far, making sure that you clip slowly closer until the black spot of the quick begins to appear.  The quickness of the dog’s nail will get longer if your dog does not have regular clippings to keep them short, so pay close attention that you do not clip too far up the dog’s nail, or you will cause bleeding and pain.  Clip until you see the black spot of the quick beginning to appear, and no further.  If you do cut too far and your dog’s nail begins to bleed, run the nail across a bar of soap in order to plug the wound and stop the bleeding.  There are also several powders available that will stop bleeding, ask your veterinarian for their suggestions as far as which to use.

Below you will find a video of how to clip your dog’s nails, provided by Dr. B on one of our patients here in Las Vegas.

Veterinarian Advice: Why It Is Important To Trim Your Pet’s Nails Live In Las Vegas And Have A Pet? Call Us First!
Scroll to top